;” data-gt-translate-attributes=”[{” attribute=””>NASA and SpaceX now are targeting no earlier than Thursday, July 14, for launch of the CRS-25 commercial resupply services mission to the International Space Station (ISS). It was initially scheduled for launch on June 10, before being delayed until July 11. The new target launch date supports ongoing Dragon spacecraft inspections as well as repair and replacement of any components that could have degraded by exposure to mono-methyl hydrazine (MMH) vapor found during testing in early June. In order to allow a more detailed off-vehicle inspection of the parachutes, the SpaceX team made the decision to replace the main parachutes on this spacecraft.

On June 13, NASA and SpaceX officials met to discuss initial findings from additional inspections and testing of the Dragon spacecraft after teams measured elevated vapor readings of mono-methyl hydrazine (MMH) in an isolated region of the Dragon propulsion system. After offloading propellant from that region, SpaceX was able to narrow down the source of the issue to a Draco thruster valve inlet joint. Teams will now remove the specific hardware to replace it ahead of flight.

The new date also allows for launch of the uncrewed cargo mission for the earliest possible rendezvous opportunity with the International Space Station following the upcoming high-beta angle period when the sun angle with space station’s orbital plane causes problems with thermal and power generation at the microgravity laboratory in the planned docking attitude for visiting spacecraft. 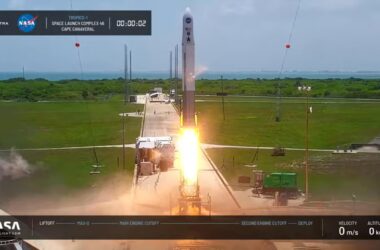